Emulators can now be launched directly from within Code. If you start debugging without a connected device you’ll be presented with a list of emulators on your system to launch.

After selecting a device a notification will appear while the device boots and connects.

You can also trigger the emulator selection by clicking on No devices in the status bar or by running the Flutter: Launch Emulator command from the command palette.

This feature relies on support from the Flutter tools which means it will only show emulators when using a very recent Flutter SDK. Flutter’s master channel already has this change, but it may take a little longer to filter through to the dev and beta channels.

Code folding is now handled by Dart Code rather than being done by VS Code based on indenting. This should result in more accurate folding regions and also allows collapsing file headers and directives.

This feature relies on support from the Dart analysis server which means it will only activate when using a very recent SDK. Flutter’s master channel already has this change, but it may take a little longer to filter through to the dev and beta channels.

New settings have been added to customize the Flutter: New Project command:

You can now set Conditional breakpoints that will only break if the provided condition is true.

Log Points are like Breakpoints but rather than pausing execution they simply print() the message and then continue. This allows you to add debug information without having to insert print()s and reload the application or revert them when committing code. Like breakpoints, they also persist across sessions.

You can now run specific scripts directly from the Explorer pane using the Start Debugging and Start Without Debugging options on the context menu. This bypasses what’s in launch.json and uses default behaviour for the given file (this includes selecting the correct debugger based on whether the script looks like Dart or Flutter and is in a test folder). 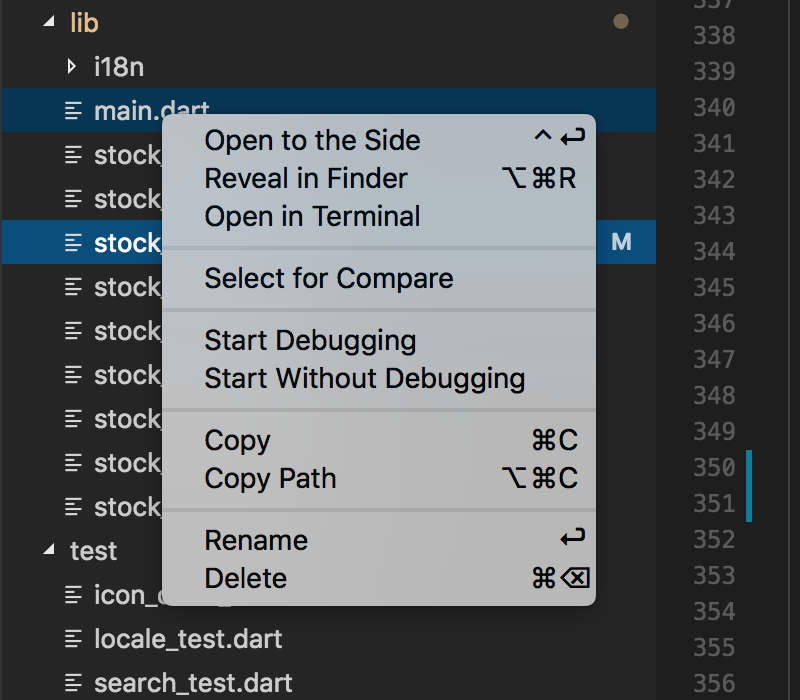 @stuartmorgan contributed Dart: Attach to Process which allows attaching the debugger to an existing process that you have an Observatory URL or port number for. You can configure this in your launch.json by setting request to attach or by simply running the Debug: Attach to Dart Process command.

You can also provide the observatoryUri in launch.json to skip this prompt when launching with F5.

Note: In this version the standard Dart debugger is attached, which means Flutter-specific functionality like hot reload will not be available.